By ken in How to help 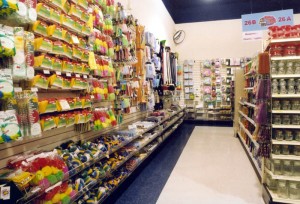 Before you head to Wal-Mart or even Sam’s Club or Costco, pay a visit to your local “dollar store.” They’re everywhere.

For example, here’s what I found in a dollar store in Kingston, NY:

3. Manual can openers – $1 (compared to…heck, I forget and I don’t want to look through a mountain of receipts right now, but you’re not getting one of these for less than $3)

These may not seem like big differences, but when you’re buying in quantity, the savings are colossal.

Can we improve on this?

One of the things I’d like to see is a web source that lists companies that sell and ship commodity products (like REAL blankets, not the bogus crap the Red Cross hands out) at their WHOLESALE price so people buying for relief efforts can get the most bang for their bucks.

It’s unfortunate that when normal people – the people who are actually funding and operating the real relief efforts in New York City and elsewhere – have to buy relief supplies out of their own pockets, they’re paying top retail prices for everything.

To add insult to injury, do-nothing, talk-much state and city governments further add to the expense (and reduce the amount of help we can send) by tacking 8+% onto every transaction. That’s a big cut for doing nothing. It’s often more than the store itself nets on the transaction itself!

How we solve this one I don’t know since governments only extend sales tax free purchase rights to “real” relief groups like…the Red Cross.

Anyway, ignore my endless aggravation with the Red Cross and its pals in government, and head to your local dollar store. You’re going to be very pleasantly surprised on the deals you find there.

By the way, you might be asking “Are these grossly inferior goods?”

They’re brands that didn’t make it and had to liquidate. They’re the inventory of stores and chains that went broke.

They’re stuff that got imported and for one reason or another couldn’t find its way into the heavily marked up retail world so they were sold for sold for a “penny a pound” to dollar stores. It’s the same crap you’re paying 200% to 500% more elsewhere.

(One thing though: Make sure you SMELL any clothes that you buy in a dollar store. I don’t know how they manage to do it, but clothes in dollar stores, while new, sometimes manage to reek.

Oh, and one more thing: Food in dollar stores? No. Unless you are really good at and really serious about reading labels. There are deals to be had, but there is also stuff that is best not consumed by human beings. If you know the difference then by all means go for it. Otherwise, leave the food section alone.)

Just think of the pleasure of buying ALL the toothpaste in a dollar store and getting change on a $100 bill. It’s like being Donald Trump or Michael Bloomberg for a day – except instead of being a flaming asshole, you’re helping people.

It really doesn’t get much better than this.

A short list of Sandy relief groups we endorse: http://www.HelpAfterSandy.org