Government and Red Cross fraud in the Disaster Zone: Three weeks after the storm

By ken in government bullshit

These are random, somewhat stream of consciousness notes from a relief supplies drop off trip taken to Staten Island. All pictures and video (not including the government and Red Cross PR photos) are from the trip.

It’s 21 days after the storm and there are still many thousands of people without power and heat. Food is scarce and for many every basic thing from soap to clean socks is in short supply.

How many people are in this predicament? No one knows because no one is counting. If someone has counted, they are not sharing the information with the news media and/or the news media is not reporting it.

How does a government operate a relief effort if 21 days out, it doesn’t know how many people are in need?

The answer is they don’t need to know because they are not operating a relief effort.

This was obvious from my two visits to the Rockaways and the full day I spent on Staten Island Friday, November 16th, the day after Obama’s photo op visit.

“Everything is squeaky clean and under control. Thanks to our efforts and your tax dollars.”

The amount of prevarication on the part of the American Red Cross, FEMA, Obama & New York politicians, especially Cuomo and Bloomberg, on how much they are helping citizens is mind boggling.

As just one example among many, Bloomberg claimed a few days ago that the city has set up “300 public warming stations.” I’ve been in over a dozen of the hardest hit neighborhoods in Queens and Staten Island and I’ve only see one and it was set up and is being operated not by any government agency or non-profit, but by a masonry contracting firm, Navillus, based in Manhattan.

The overwhelming portion of help is coming from neighborhood people, business owners, and small groups with a wide variety of political and religious orientations both from within and outside the city. 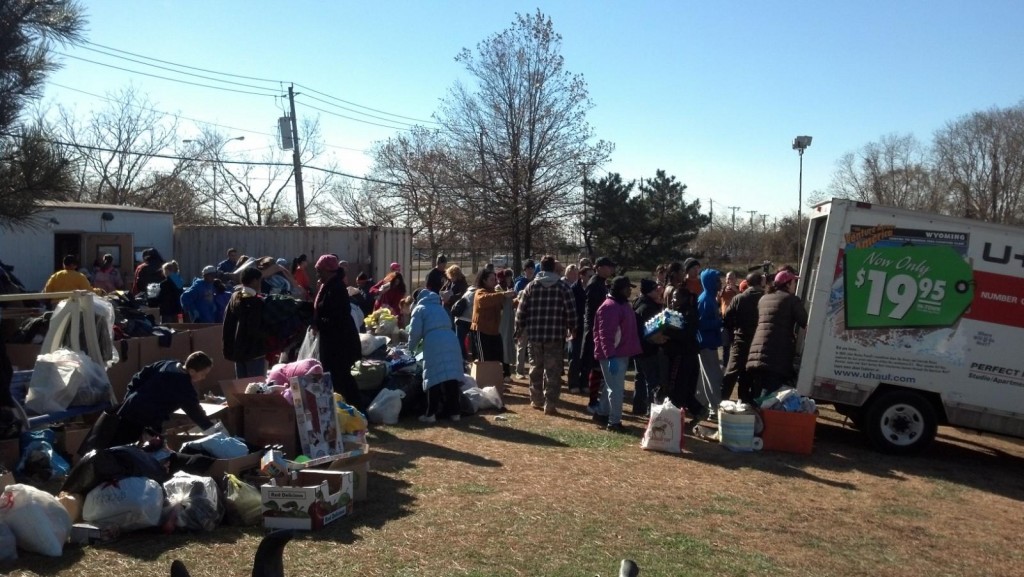 One of just scores of entirely privately funded relief centers run by volunteers and supplied directly by human beings who are receiving next to no government or Red Cross Help. The government and Red Cross do not want you to see these pictures and the media is cooperating.

Were it not for this help, which in the aggregate is massive, many people would be starving at this point.

The government is denying its inability and/or unwillingness to help the victims of the storm and making blatantly fraudulent claims about what they’re doing to help as well as the desperateness of the situation.

The entire political class up and down the ladder is cooperating with the fraud.

One member, the Borough of Staten Island president, went “off the reservation” briefly to accurately complain about the inactivity of the American Red Cross, but he is now firmly in the political class camp going even so far as to threaten the street corner grassroots relief efforts with shutdown. Bloomberg is also making noises about doing this too.

Along with the government, the American Red Cross is also engaged in a massive fraud, staging photos ops, and then widely publicizing the pictures to give the impression that their efforts are meaningful (they are not, given their size and funding) in order to solicit donations.

1. The American Red Cross has an open government contract in which they are reimbursed for 100% of all the expenses involved running specific relief operations. So every blanket, every crumb of food, every gallon of gas they’re burning will be paid for with your tax dollars.

2. The American Red Cross usually soaks up about 70% of all the money that people donate for high profile relief operations. That means that all the other groups, including many of which are doing truly heroic and much needed work, have to share the remaining 30% of the pie.

3. The American Red Cross reserves the right – and uses it every time – to spend money donated for a specific catastrophe in any way it chooses.

This means if you give the American Red Cross money to feed freezing, hungry people in the Rockaways right now, the American Red Cross is perfectly OK spending it on a weeklong management retreat in Maui for their executives. Just Google “Red Cross fraud corruption” and you’ll see that they’ve been caught doing these kinds of things – and much, much worse – many, many times over a very long period. 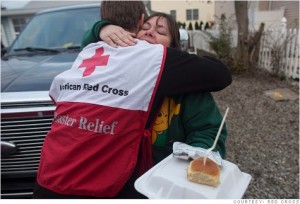 Obama’s visit to Staten Island yesterday was another example of a well-orchestated fraud.

One tiny slice of the devastated area was cleared for him as a backdrop. He posed there with some young people in blue windbreakers who are members of a phantom organization called “FEMA Corps”, hugged a woman for the cameras and was on his way back home.

The news media is cooperating with the party line and makes these frauds possible.

Reporters and cameramen see the devastation. They can see the scores of ad hoc volunteer relief stations desperately trying to keep up with a demand these small operations don’t have the resources to fill. However, instead of reporting on these efforts and encouraging the public to support them, all they do is recycle American Red Cross, FEMA and government baloney in essence stealing resources from them and the people who need them.

The word “vampires” comes to mind when watching how the news media, the American Red Cross, FEMA and the rest of the government are operating in this most desperate of situations.

There are hundreds of eye witnesses to this sham – police officers, National Guard troops, and people on the street. All anyone has to do is ask them what they’re seeing,  but no one is asking and no one is reporting.

The situation in New York goes beyond gross incompetence.

What we have here are are small group of people who in order to maintain their positions are deliberately misleading the public as to the extent of the problem, what is needed, and how the public can help. 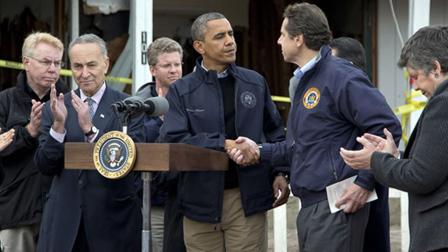 Instead of providing information and leadership to a population that is full of people who would gladly help if only they were directed how, they (the American Red Cross, FEMA, Obama, Cuomo, and Bloomberg) are fraudulently claiming that everything is under control and it’s all thanks to their good works. As if that weren’t bad enough, they’re actively diverting critical financial resources away from the groups that are doing the most good to one (the American Red Cross) that has proven again and again to be close to useless.

And like the thieves they are, they’re all backing up each other’s stories.

The needs continue to be great – maybe greater than ever –  today 21 days after the storm. 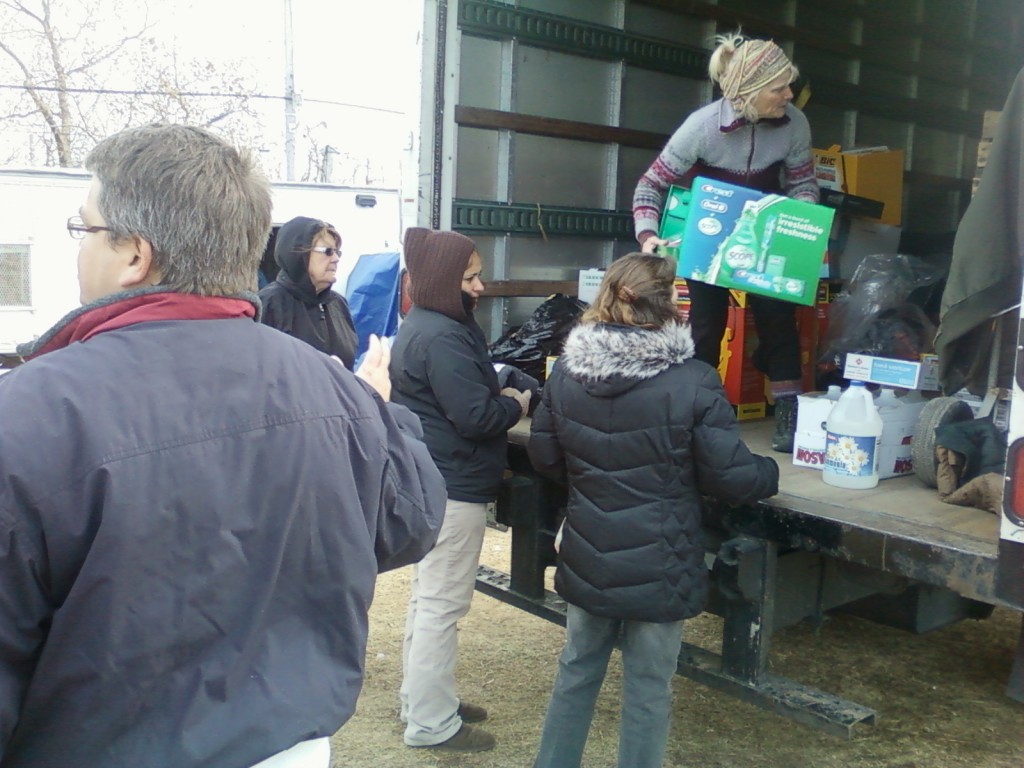 Donated truck. Donated supplies. Volunteer labor. Red Cross and the government nowhere in sight. This scene is being played out all over the disaster zone.

← Veterans Day in the Rockaways
How to donate clothing in a disaster: It’s a life and death issue →

19 Responses to Government and Red Cross fraud in the Disaster Zone: Three weeks after the storm